I’ve become increasingly convinced of the importance of treatment interactions—that is, models (or analyses) in which a treatment effect is measurably different for different units. Here’s a quick example (from my 1994 paper with Gary King): But there are lots more: see this talk.

Given all this, I was surprised to read Simon Jackman’s blog describing David Freedman’s talk at Stanford, where Freedman apparently said, “the default position should be to analyze experiments as experiments (i.e., simple comparison of means), rather than jamming in covariates and even worse, interactions between covariates and treatment status in regression type models.”

Well, I agree with the first part—comparison of means is the best way to start, and that simple comparison is a crucial part of any analysis—for observational or experimental data. (Even for observational studies that need lots of adjustment, it’s a good idea to compute the simple difference in averages, and then understand/explain how the adjustment changes things.) But why is is it “even worse” to look at treatment interactions??? On the contrary, treatment interactions are often the most important part of a study!

I’ve already given one example—the picture above, where the most important effect of redistricting is to pull the partisan bias toward zero. It’s not an additive effect at all. For another example that came up more recently, we found that the coefficient of income, in predicting vote, varies by state in interesting ways: 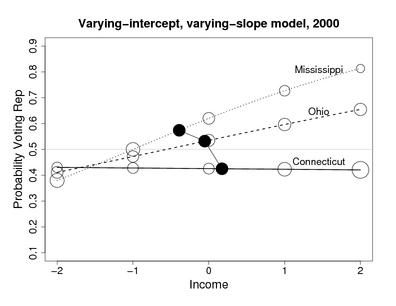 Now, I admit that these aren’t experiments: the redistricting example is an observational study, and the income-and-voting example is a descriptive regression. But given the power of interactions in understanding patterns in a nonexperimental context, I don’t see why anyone would want to abandon this tool when analyzing experiments. Simon refers to this as “fritzing around wtih covariate-asjustment via modeling” but in these examples, interactions are more important than the main effects.

Dave Krantz has commented to me that it is standard in psychology research to be intersted in interactions, typically 3-way interactions actually. The point is that, in psychology, the main effects are obvious; it’s the interactions that tell you something.

To put it another way, the claim is that the simple difference in means is the best thing to do. This advice is appropriate for additive treatment effects. I’d rather not make the big fat assumption of additivity if I can avoid it; I’d rather look at interactions (to the extent possible given the data.)

I followed the link at Simon’s blog and took a look at Freedman’s papers. They were thought-provoking and fun to read, and one thing I noticed (in comparison to my papers and books) was: no scatterplots, and no plots of interactions! I’m pretty sure that it would’ve been hard for me to have realized the importance of interactions without making lots of graphs (which I’ve always done, even way back before I knew about interactions). In both the examples shown above, I wasn’t looking for interactions—they were basically thrust upon me by the data. (Yes, I know that the Mississippi/Ohio/Connecticut plot doesn’t show raw data, but we looked at lots of raw data plots along the way to making this graph of the fitted model.) If I hadn’t actually looked at the data in these ways—if I had just looked at some regression coefficients or differences in means or algebraic expressions—I wouldn’t have thought of modeling the interactions, which turned out to be crucial in both examples.

I know that all my data analyses could use a bit of improvement (if only I had the time to do it!). A first step for me is to try to model data and underlying processes as well as I can, and to go beyond the idea that there’s a single “beta” or “treatment effect” that we’re trying to estimate.

10 thoughts on “Treatment interactions in experiments and observational studies”